It was a dark and stormy night...well not really dark, and it may have been very humid, although when I think about it, was in fact quite sunny and hot. But it was a large block of briar. Since it's easier to cut smaller blocks, this size of cross cut ebauchon is rare, especially as free from flaws as this one was. Due to its size and dimensions, there was really only one shape that it could be, a saddled Billiard.

Originally, the idea was to create a large piece for the Chicago Pipe Show. Unfortunately, the tooling required to create a viable smoking pipe was not in the Chheda workshop. Since Chicago and the addition of a several new pieces of equipment, it has become possible. "We can build it, bigger, better, and stronger!" 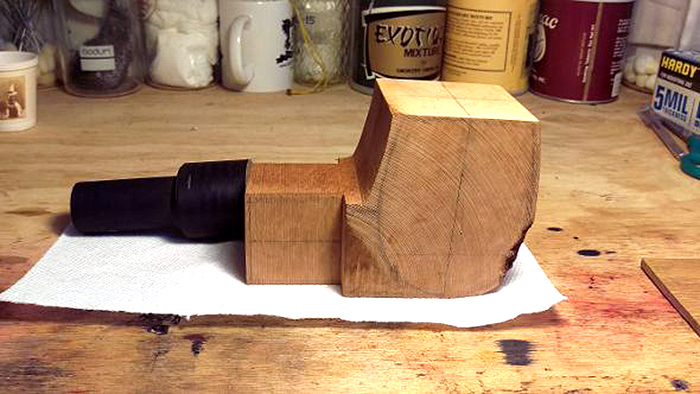 The stem alone is comparable in size to the majority of pipes in our inventory. 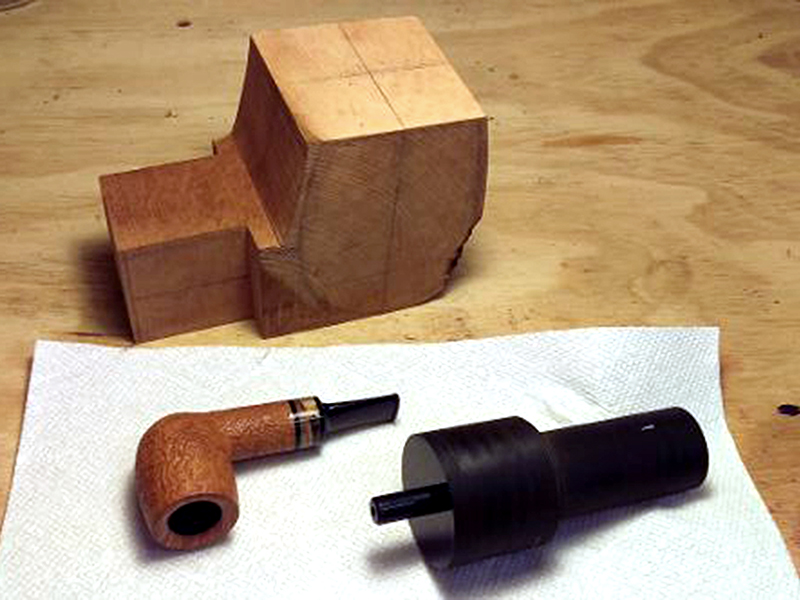 Now we come to the engineering.  The block was fit to a lathe and the mortise and airway were drilled.  Next, the shank was turned down, followed by drilling the tobacco chamber and turning down the bowl (this last bit was done with a freehand blade that gives the bowl its proportion).  Pipe making steps aside there were some problems.  The sheer size of the bowl meant the chamber appeared too small and didn't fit the proportion of the pipe's shape even when the largest bit in the shop was used to drill it.  To tackle this hurdle, a boring bar was used (no, not an establishment that serves only room temperature tap water) to widen the chamber to the correct size and went back in to round out the bottom by hand.  It took quite some time but was well worth the effort

And then after finishing the touch and go hand work -

Having taken the briar to task on the lathe and on a sanding disc, the rough shape started to take a more refined look. 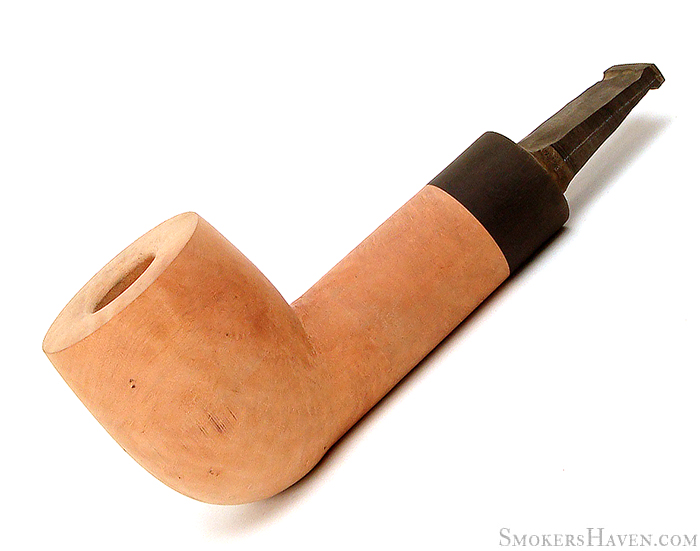 This is the largest pipe I have ever had the opportunity to hold, so I wanted to give it some perspective.  This is the pipe next to a Dunhill Group 5 Billiard for comparison. 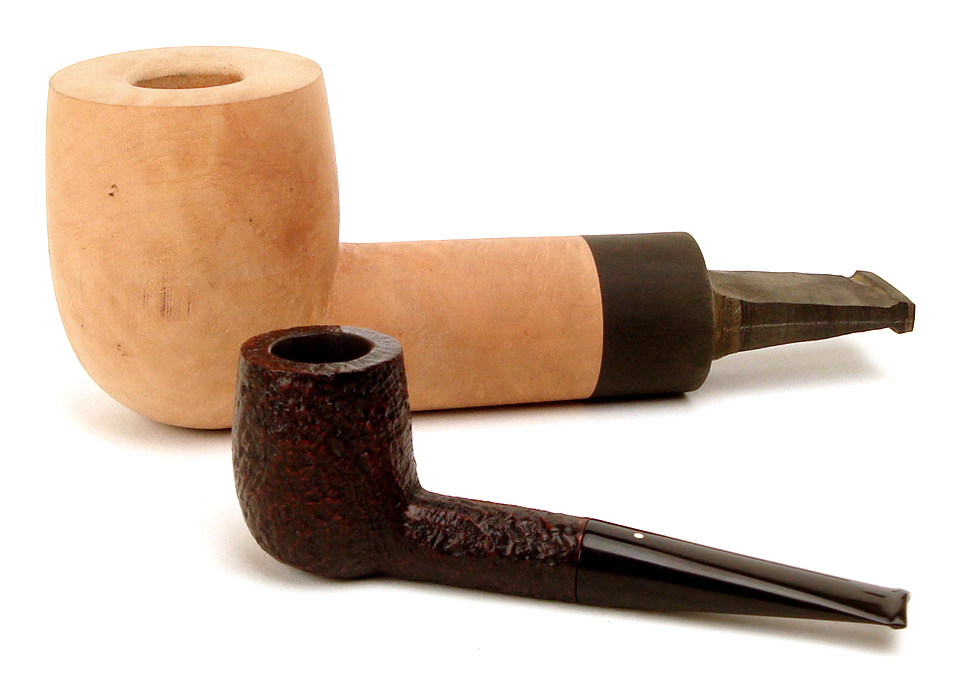 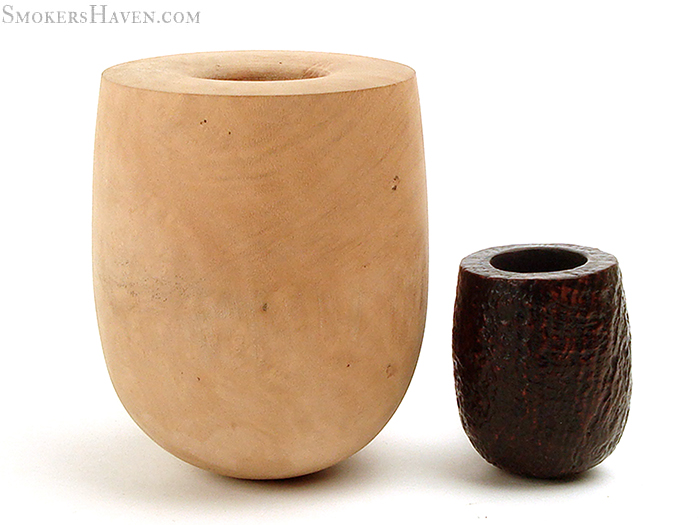 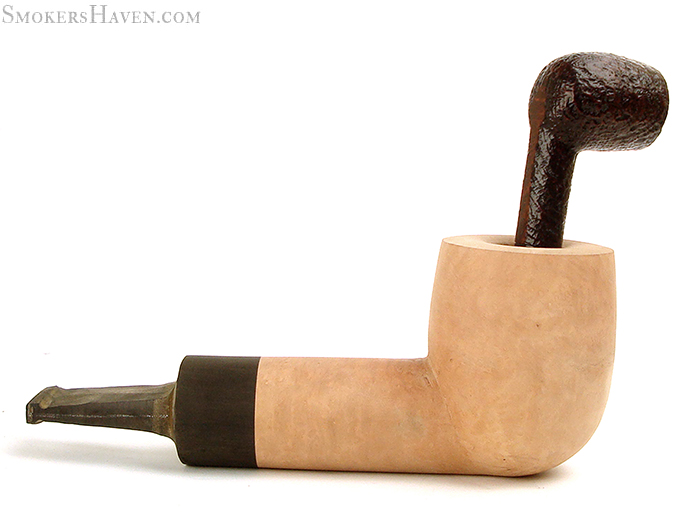 Having cut the slot and engineered the taper of the airway, everything from this point forward should have gone smoothly.  Nothing is ever as easy as it should be.  Rough cut and shaping finished, It was time to introduce Bertha (I started calling the pipe Bertha at this point) to the sandblasting cabinet.  Although a very nicely grained pipe, it was not the caliber necessary to be a Chheda Smooth.  Sandblasting a pipe is not an overly difficult process, but to do it extraordinarily well does require a bit of science, art, and nuance.  Typically a light pass is made around the whole surface of the stummel just to get to know the personality and character of the briar.  The pipe was half way done with this initial step when the motor on the air compressor blew (there was no actual explosion - would have made a great story, assuming nobody got hurt).  The cabinet quickly lost pressure and all sandblasting projects came to a halt.  I call it the "Halfblast."

I propose that there was a slight gravitational shift given the immensity of the briar and the materials that make up the motor, compressor, and cabinet sensed this shift, panicked, and simply could not handle the monumental task (No one else takes this opinion seriously...).  The next day was spent installing a new motor and our workshop capacity once again increased due to this pipe's creation. 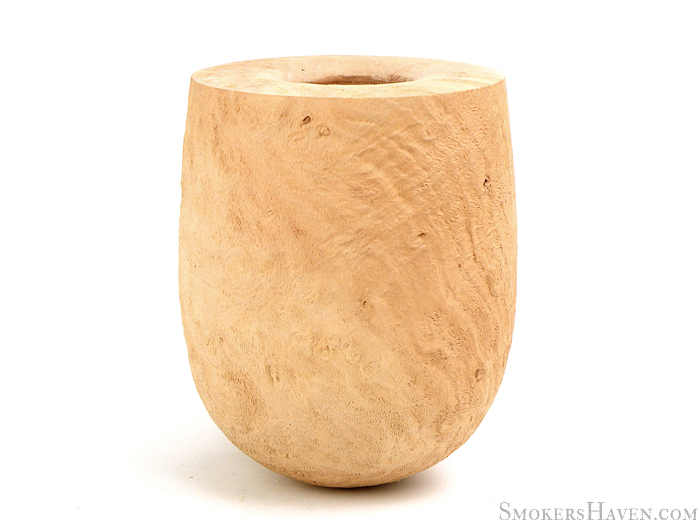 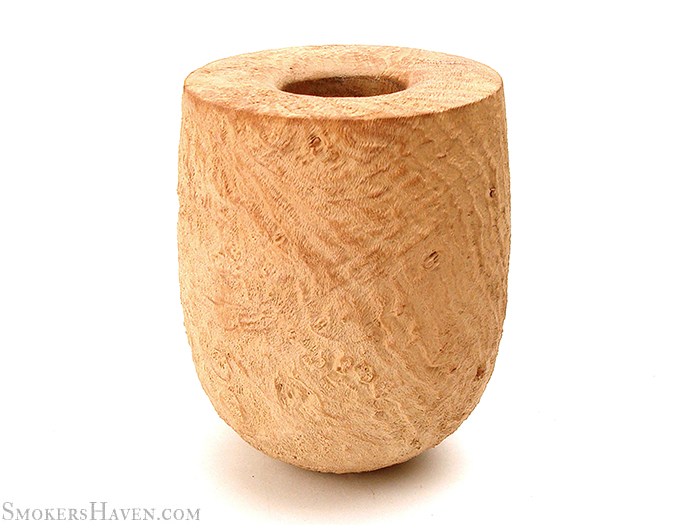 The rest is pretty routine.  The pipe was given 3 coats of color and finished with the usual QC of a high end artisan piece.   At the time of that picture, based on our own research, which is in no way educated, thorough, or exhaustive, by any means, we estimate this to be the fifth largest pipe created for an actual enjoyable smoke.  All told, it was hundreds of dollars in materials, 15 hours of time, one new motor, and quite a few pictures.  Interestingly enough, a longtime customer purchased this pipe before it was even completed - it never made the website, hence this very long blog post. 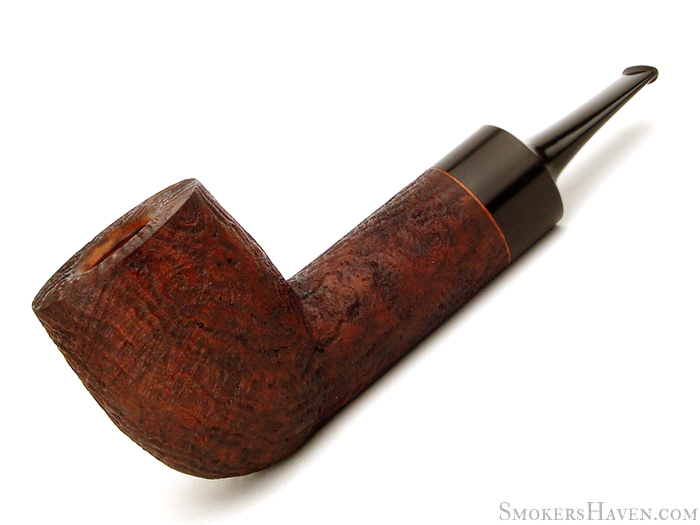 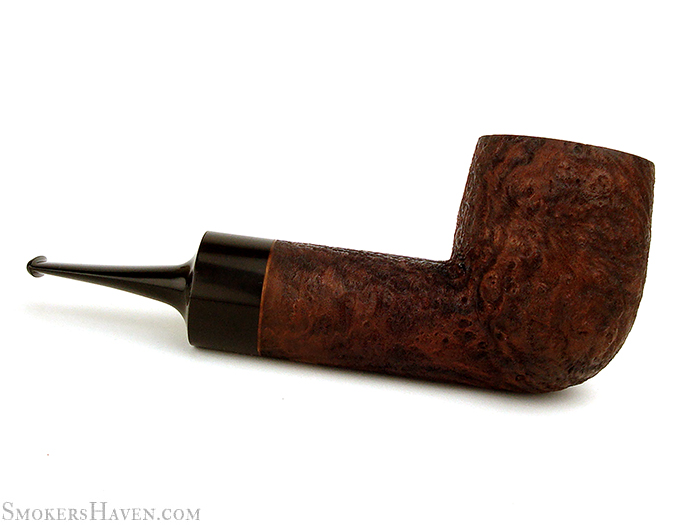 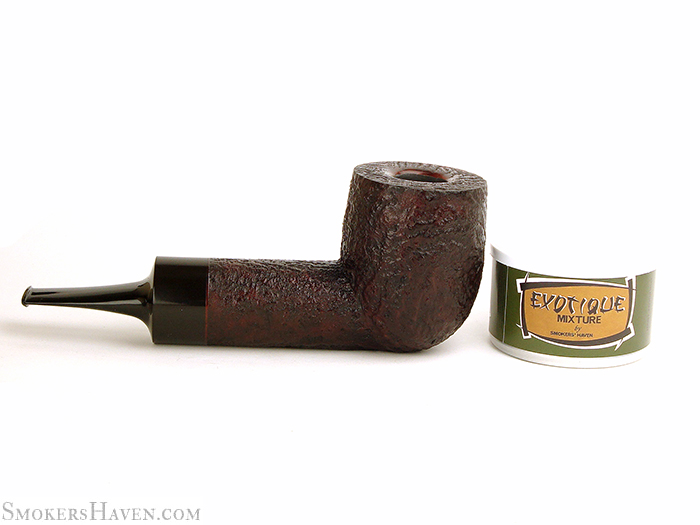 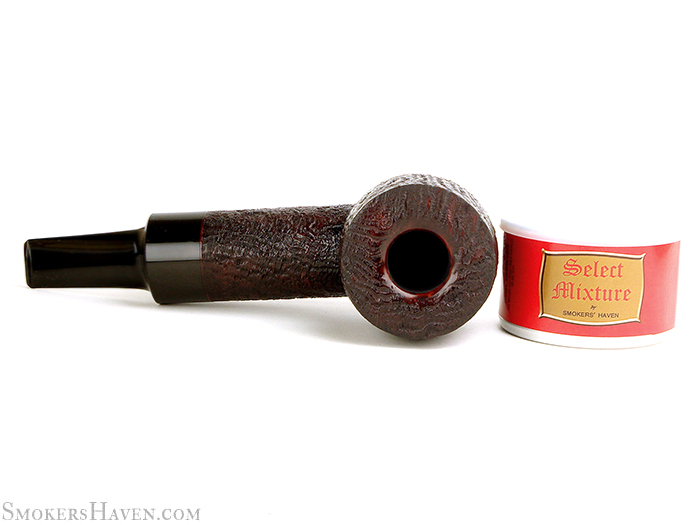 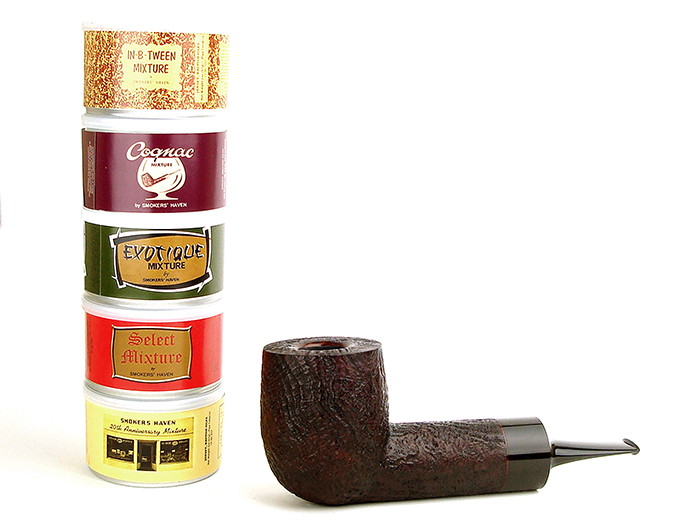 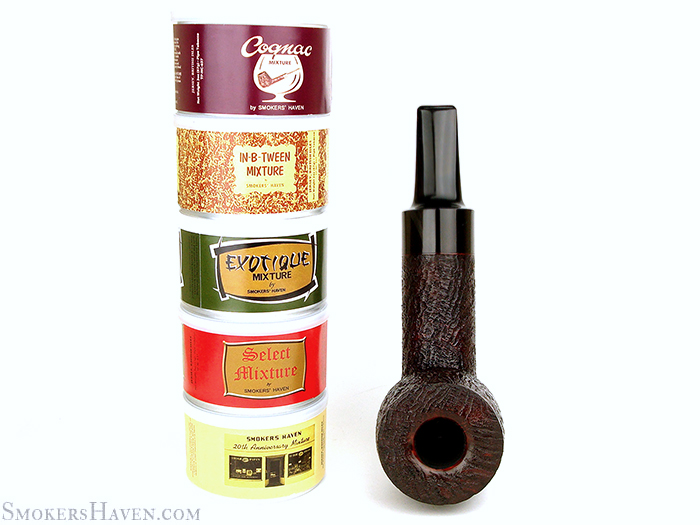